Practising the Eagle Dance at Earthsong 2012

Looking back over the week at earthsong what was most powerful for me was the eagle dance. I resonate and enjoy very much the connections shamanism acknowledge with the cosmos, fellow humans, plant, animals and birds. The eagle, the leader of birds, holds a particular resonance in their rituals. Madeline taught 9 of us the eagle dance. She spends her time in the Himalayas where last year she felt the presence of an eagle calling her to teach the eagle dance at earthsong 2012. She had no prior knowledge of the dance, so she contacted some native american indians and began her research 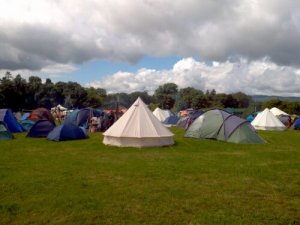 We had some practice sessions, then on Saturday 14 july, in the big top, the largest tent on site, we put on the feathers and hat we made out of old bed sheets, painted our faces as our own inner eagle led us and set up the medicine or spirit wheel ie a circle of 12 or 16 stones around the centre of the circle beginning with a stone at the east, then s, w and finally north. A stone was placed to honour the mother earth and one to honour the father sky or cosmos. Everyone was then smudged. Smudging cleanses the mind and environment in preparation for the ritual. The sacred smoke, created by burning dried natural herbs, commonly sage, dispels stagnant energy, opens the energy channels in your body and raises your personal power, your ‘windhorse’. The leader of the ritual smudges each person in turn, drawing the sacred smoke over the whole body, incl footsole, then she smudges the drum. She thanks the plant for the purification. Then standing first at the east stone on the medicine wheel, she makes smoke offerings to invoke the spirit of the east, then clockwise to the south, west and north, earth and sky. She honours the particular characteristic of each direction. These characteristics vary somewhat between cultures, but have more in common than not, something like this…..east: eagle, morning, birth, beginnings, fire element; south: summer solstice, serpent, midday, youth, trust, growth, air element; west: bear, twilight, introspection, healing, emotion, death, water element; north, winter solstice, darkness, wisdom, clarity, renewal, blessings, earth element

Then she passed around a beautifully decorated stick with the 4 directions, earth and sky depicted on it, to set our intention verbally for the dance. She asked us to take on the spirit of the eagle. Detachment, power, clarity, focus and grace is what i remember came to me. And bringing these characteristic we began to move out of the tent to a stone circle, in line, dancing to the heartbeat of 3 drums,  180 beats @min. We lined up in the circle and 2 began dancing. We used some of the steps we were taught and also improvised as the spirit of our own eagle led us. When one person finished they rejoined the line and a new person began dancing around the circle. So there was always 2 dancers. People started to gather and held hands around the circle. It was wonderful. I swished and swooped. I held my poise and wandered alone on the winds. Eventually after 5 or 6 dances each, all the onlookers joined in.

Great, fun way to drop consciousness into the characteristics of clarity, focus, power and detachment